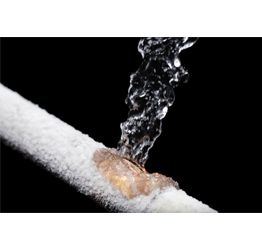 Freezing winters take a toll on everyone and everything we own. GTA residents in particular are no stranger to slippery sidewalks, slushy roads, impossibly cold surroundings, and at worst, broken plumbing fixtures right where they matter most. That’s right — frozen pipes at home are an unfortunate reality of the sub-zero season.

Whether due to their underground layout or ageing materials, pipes can freeze and even burst when continuously exposed to sub-zero temperatures. And because all of that water needs to go somewhere, indoor flooding isn’t far behind. That’s why it’s important to check your plumbing system regularly and weatherproof ageing fixtures, or plan ahead for winter-rated replacements.

All About Frozen Pipes: What to Look Out For

The first sign of frozen pipes is coming home to empty taps. This happens because water freezes and stays lodged in the pipes. When left untreated, they exert pressure on the pipe walls, causing them to crack or burst. Depending on the size, this can result from anywhere between a leak to a full-on flood.

Luckily, frozen pipes are preventable through weatherproofing. Since we know when the temperatures drop to sub-zero, professional plumbers can save you the cost and hassle of a plumbing emergency. All it takes is early detection and proper maintenance. Start by locating pipes that are most likely to freeze, which include:

Plumbers can help you thaw frozen pipes using carefully applied heat. If the frozen or burst pipe floods your basement, you need this time to dry the area to prevent mould and mildew from forming, as well as remove waterlogged furniture and appliances. Once the pipes are thawed, they check for leaks and perform temporary fixes until you are informed of repair and replacement options.

Depending on the damage, frozen and leaking pipes can be repaired by tightening pipe joints. Plumbers can also apply a protective layer of resin to patch up small cracks and minor damage caused by frozen water.

In cases of severe damage such as pipes bursting from the pressure, a full replacement is a better, longer-lasting solution. A professional plumber can install new fixtures and add weatherproofing fixtures like heating cables to prevent pipes from freezing again. These fixes are designed to get the taps working again, and restore your home’s water supply once the damage is contained.

Drain King Plumbers is available 24/7. Our plumbers can respond to any emergency, including frozen and burst pipes that cause leaks and flooding. You can count on our team to provide fast and effective service wherever you’re located, no matter when it happens. But until then, sit tight — the last thing anyone wants is a DIY repair gone wrong, especially with tricky pipe joints, complex water supply, and waste disposal networks.

We use the latest plumbing techniques and equipment to thaw frozen pipes, repair leaks, and replace burst pipes, so you can turn on the taps again and get the water flowing. But even better, we offer proactive plumbing maintenance and winterizing to prevent all of these plumbing emergencies, so you can cook, clean, and shower without fear of frozen and burst pipes no matter the temperatures outside.

When to Call a Plumber for Frozen Pipes

Our 24/7 emergency plumbing services get the pipes working and the taps running after freezing, or worse, bursting. Should you wait to come home to empty taps, large leaks, or a flooded basement? We all feel the chilly — and even biting — sub-zero temps when they hit, and both exposed and indoor plumbing fixtures are no exemption to Canada’s brutal winters.

Not sure if the pipes are frozen or well on their way to bursting? Look out for these common signs of frozen or poorly winterized pipes and call us first chance you get:

Exposed pipes are those found outside your home, such as in the lawn or yard, as well as in unheated crawl spaces or attics and basements. Because they’re unheated, these pipes are more prone to freezing bursting. To prevent this, make sure that they are weatherproofed year-round and winterized when the temperatures drop.

It sounds like a reach, but the furnace plays a crucial role in preventing frozen pipes. The warm air and stable indoor temperatures that the furnace regulates help prevent pipes from freezing and bursting. The same goes for the water heater — it needs to be properly drained before the sub-zero temps roll in to make sure that it’s working properly and keeps the taps from freezing.

Winterizing fixtures is the best way to prevent them from freezing in the first place. For outdoor faucets, especially, this means turning them off and draining them, then keeping them covered. You must shut off the water supply to these faucets to prevent water from building up in the pipes and freezing.

It’s easy to keep an eye on frozen pipes and prevent them when you’re home. But we can’t blame you for taking a break from the cold. Just make sure you won’t come home to a burst pipe and a flooded basement.

If you’re leaving for an extended period, now is a good time to try smart thermostats to monitor and control your home’s temperature and heating to keep pipes from freezing. For even longer trips, shut off the water supply and drain the pipes, or leave a slow drip running with the thermostat high enough to prevent freezing.

To learn more about preventing and repairing frozen pipes, contact Drain King Plumbers here, or give us a call at 833 983-5301. We also offer emergency plumbing services for burst pipes 24/7, so call us for a fast and effective response to leaks and flooding.

Request Information
Get A Free Quote
Get A Quote
Apply Now